This is a major step forward in the scalesmall project. The group management code is largely written. The next step is to design and implement what the group is supposed to do.

In this post I will document the achievements and show how to use the scalesmall group management code. 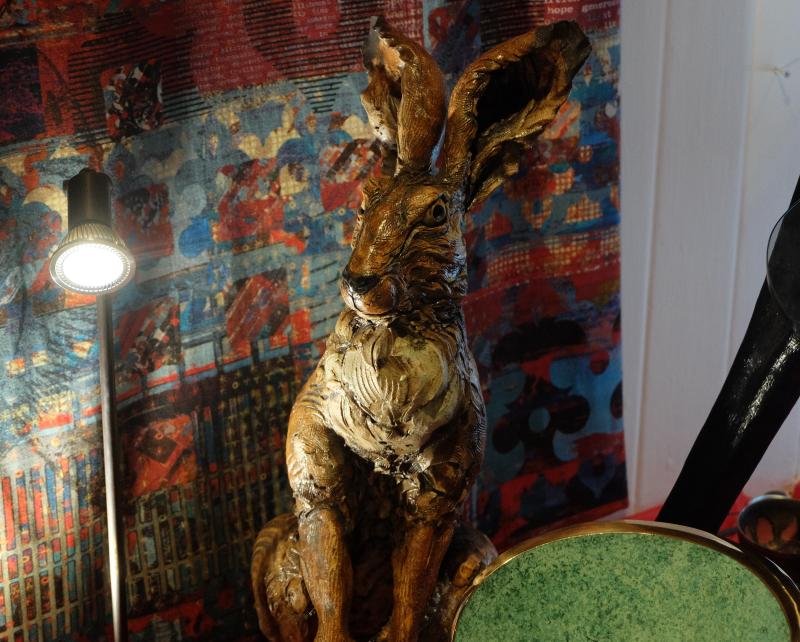 Why do I need any code for managing a group of nodes in Elixir? The BEAM VM has means for nodes to join each other. It can detect nodes leaving and this is a great foundation for building up a distributed system. Still I have a few ideas and requirements that I want to serve differently:

What is group membership

Seems to be an easy question. The group is a set of nodes and membership is being part of the group. This is simple so far. Let’s complicate this:

This article gives a good idea of what is possible and what are the limits of BEAM VM distributed architecture support. The TLDR; is that BEAM VM uses a mesh topology which doesn’t scale to thousands of nodes. There are ways to circumvent this but none of them seemed to be an easy thing to me.

In scalesmall a node can join and leave multiple groups. The rationale behind that is when I have different machine types like:

Let’s define 4 groups based on roles:

Based on these various machine types and roles it would be nice to put them into multiple groups. For example if the CUDA box is idle it can be used to cache data in RAM, or the Banana PI can offer two cores of CPU if the demand for processing power is high.

The other factor is that CPU, Disk, IO Bandwith, Memory speed and capacity, all gets better over new generations of computers but they improve at different pace. So one computer that was great at the data processing role may be not so great there in two years time, but it could still serve as a backup or storage node. So the roles may be rearranged over time when I buy new machines.

I would like to stretch the definition of group membership, so it is not just about a bool flag about the node being or not being part of a group. In scalesmall I want the group members to tell others what they do in the group. Here is how. The task of a group is to serve a key range of 0 to 2^32-1. Each node in the group advertises the:

It is up to the nodes to decide what key ranges they serve. If noone serves a key range then it is not going to be accessible.

There has to be a smart algorithm on the nodes that gathers the topology of the group and based on its capacities decide what part of the key range it wants to serve. (This algorithm is yet to be designed.)

When I don’t know any members of a group or I am the first one in the group I can join the group with only the name of the group. This sends a multicast message on the network so if there are other peers they will know I want to participate. Whenever they send a multicast I will know about all other members.

If I explicitly add a list of nodes I want to be notified about my will then I can add them in the list. They will be contacted through TCP through a logarithmic broadcast. More about the various communication methods in the communication between nodes section.

More on the NetID type in the group manager messages and data types section.

This returns a list of NetID types which identifies peers. Each node slowly learns about all other groups too, so I don’t need to be part of a group to know who the members are. To gather the list of groups I can do this:

Tell others I want to serve a key range:

This tells others that I want to serve the key range from 0xf to 0xff and my service is accessible on port #11223.

The topology is a list of TimedItem objects, which has a local clock and the topology data. More on TimedItem, Item and LocalClock in the group manager messages and data types section.

The above list has :get and :add items. :add represents the participation in the key range and :get tells other members, that we are interested in updates about the group topology. If I want to see those who participate in the key range I can:

I can also check which groups I am participating in:

How to leave a group:

Notice that all my :add and :get items are replaced with :rmv items, plus the associated clock number has increased. More explanation below.

The group management messages have the basic properties of being idempotent so nodes can resend them any number of times and associative and communtative, so any order of applying messages lead to the same results. The majority of the inspiration comes from the CRDT datatypes and conference talks about idempotent messages. I had extensive ramblings about these in previous posts like this one.

So once I designed the message contents I could focus on the message distribution which works like this at the high level:

I started thinking about logarithmic TCP broadcast in this and this previous posts.

The ideas is to share the burden of transmitting data between nodes. Every time I broadcast to others I do this:

I keep repeating until the destination set is empty. 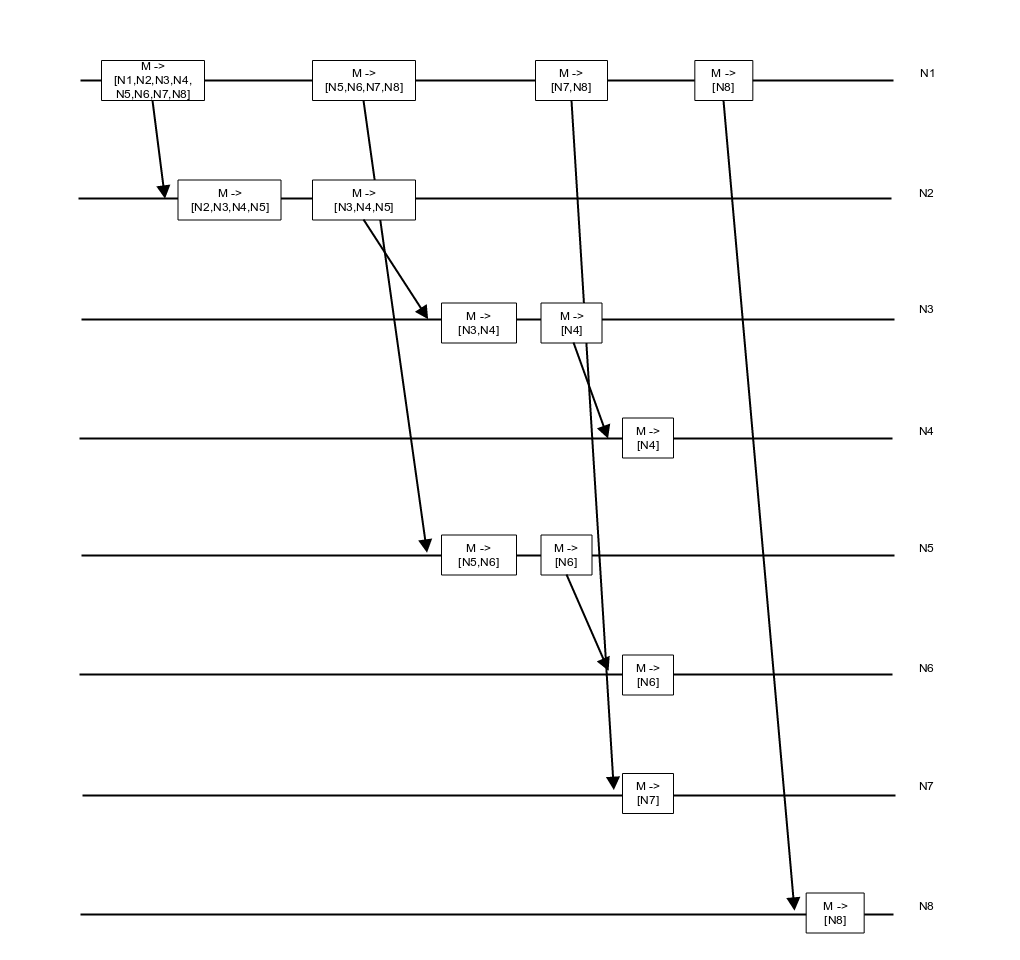 The goal is to reduce the number of sends N1 does at the expense of a slightly larger messages. The Gossip message holds the extra data plus the original message payload.

The logarithmic broadcast has one issue though. When more nodes are involved in the message distribution, the more traffic is on the network. I added UDP multicast as an optimization to reduce the messages on the local network and also improve performance since the local network nodes will receive the information sooner.

When the nodes are spread accross multiple subnets, the UDP multicast optimization will only remove the local network nodes, so the broadcast tree will follow the network topology.

The IPv4 address follows the Erlang convention, it is a tuple of four integers.

The GroupManager.Chatter.Gossip data type holds the extra metadata needed for the logarithmic broadcast and the UDP multicast optimization:

The group topology, that is which node serves which key range is represented by the GroupManager.Data.Message.

This type represents the shared knowledge about the group topology.

There are two protected ETS tables wrapped in services to hold the network and group topology information:

The network communication is handled by these services:

These services are part of supervision tree.

Areas to be improved

I realize this post became too long, so I want to dedicate one post to explain why and how are the messages idempotent, associative and commutative. Plus another post that dives more into this combination of TCP broadcast and UDP multicast.