Wrapping Up My Elixir Tcp Experiments

In this post I close my TCP small message experiment series in Elixir. Since my last post I further improved the small message server both in terms of performance and it became more Elixir-ish.

If you haven’t followed the previous experiments then here are the links:

In this post I recap what caused performance loss in my code and what made possible these improvements. The current version is doing over 3M messages per second.

Previously I inlined the codes into my posts which I believe is not very convenient if you want to experiment. The github repo is available here. Feel free to clone or fork.

I slightly renamed the files and the modules:

With the latest changes I arrived to the 3M messages per second range:

Now I am using a separate ACK responder process because I figured out what caused the performance issue with that before in the second and third experiment.

Using separate Elixir processes is a great way for concurrency. At the same time it is important to understand their performance implications. Sending a message to a process is not as lightweight as I thought. This takes time on the sender side which is far bigger than I expected. And the receiver’s message queue can also be overwhelmed.

What I have read so far about Erlang and Elixir concurrency is pretty misleading. Authors seem to be too happy that they can implement a useless Fibonacci example by parallel processes. In practice one needs to be careful and measure the results.

In my third experiment I offloaded the ACK processing to a timer and a Task process. Later I realized that passing large number of messages to a separate process is too expensive and I moved the ACK generation into the same process that reads from the network. This gave me 9x performance improvement.

While I was happy with the improvement I started thinking about how to revert this and delegate the ACK processing to a separate process, because in a new experiment series I want to make the small message server distributed. So I decided not to pass each messages, but rather the original data blocks I read from network and offload the parsing to the separate process too. This is what helped achieving the 3M messages. 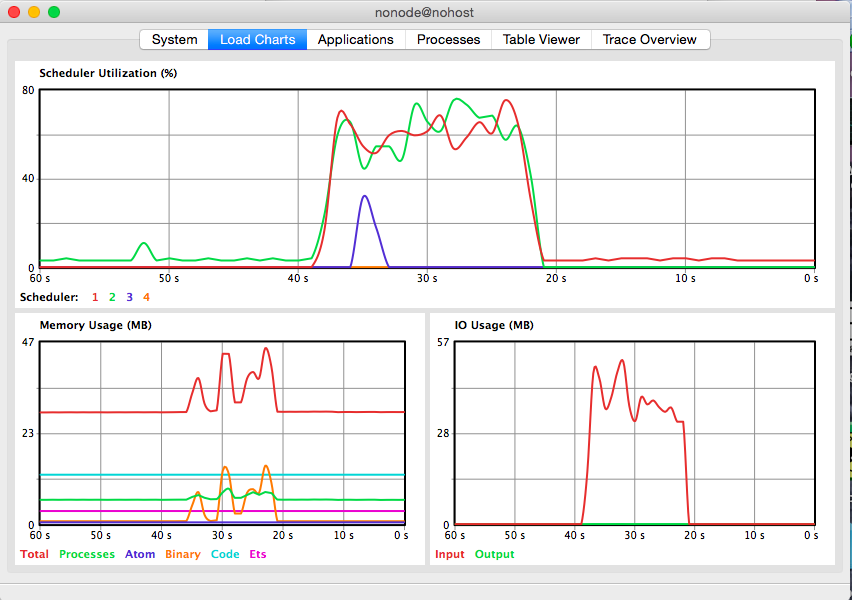 The message structure in this experiment has three parts:

At my first naive attempt I did two reads to receive messages. First I read the two fixed length fields and then, based on the Payload size I read the payload. This was very slow.

Then I decided to do as big reads as available from the network and try to parse whatever I had. This can be tricky because the data may be split between subsequent reads. Solving this in Elixir turned out to be very easy.

I only tested on my Macbook Air which I thought is OK as long as my goal is to improve my Elixir skills by polishing this experiment. Thanks to Panagiotis PJ Papadomitsos’ comments I checked this on a spare Linux box too. This is around 7 years old box running Linux non-virtualized. I have a few other boxes at work but they all running VMware VMs, so as per Panagiotis’ suggestion may not be the best for these tests.

Here are the results:

Here is the cpuinfo for this Linux machine:

This CPU is way slower than my Mac’s so I don’t want to compare the absolute numbers. The main takeway for me is that the performance is dominated by the relation of the network performance versus the CPU power. This could have been obvious but the actual numbers are very interesting. My latest AsyncAck code that performs best on Mac becomes second on the slow Linux box. The Erlang VM settings on the other hand made little difference, I guess because the CPU power was too slow for these settings to actually matter.

I start to have the feeling that writing performant Elixir code, one also need to think about the hardware where it is going to run. At least for this kind of networking code. I am saying this because the only difference between the SyncAck and AsyncAck code is that I have put the Ack processing on a separate process for which the CPU was not enough in this box. So to max out this Linux box I’d need to make a software architecture decision too. This is pretty much in contrast to what I expected. My naive feeling was that a well written Elixir code would run equally well on any computer / OS, only that the relative performance of the boxes would differ.

I couldn’t resist to do another experiment on a c4.large EC2 instance, running FreeBSD 10. Here are the numbers:

Interesting to see how a faster CPU and a different OS impacts the numbers. Just like on Linux, my separate ACK process that worked well in Mac OSX, hurts performance here.